Camas: The Roots of Life, Story, & Memory in the Land

Known by a few names, Camas (quamash, or more specifically ḰȽO,EL [pron. Kwtla-el]) is a beautiful flowering member of the lily family that brightens many spots along what is now called southern Vancouver Island every spring. With beautiful purples and clear whites, the camas tells us that spring has arrived and that summer is on its way. For many of us who are settlers here, descended from a vast number of peoples who came to these unceded and unsurrendered Coast Salish territories, the camas that blooms beneath the Garry Oaks of the various parks is a lovely spring sight that transforms the pastures of several parks from the rolling, green of winter in a very specific way that is tied to living on these territories. We may or may not know it, though the numbers of these flowers indicate that camas was a major staple food for the L’kwungen and WSÁNEĆ peoples before colonization. There is much more that the camas is trying to tell us newcomers with their late-spring bloom.

Camas grows throughout the Willamette Valley in Oregon (Kramer 2000), as far north as places like Prince George, and has been found archaeologically as far east as Blackfoot territory where it was imported and cultivated (Johnston 1970). Camas was traded, it was a source of wealth to the people in whose territories it grew naturally, central to the diets of pre-colonization peoples in the area (Turner & Kuhnlein 1983). It was grown (and still grows) in such quantity in places like Ku-sing-ay-las (a name for the area that is known as Victoria now) that it shaped the way the Coast Salish connect and communicated with the lands (Suttles 2005), influenced how communities were established and where camps and villages were built. In many ways, camas was/is as culturally important as the salmon, though camas  didn’t move so rapidly or expansively on their own. A starch that travelled well, camas brought people together all over the western coast of Turtle Island (one way of referring to the still existing Indigenous “North America;” based on the Haudenosaunee oral history of Sky Woman, this term was taken up during the 1970’s as an anti-colonial term for the continent), connecting the Coast Salish peoples in ways not always assumed in our colonial society. It is quite possible that Cowichan camas was even traded for the volcanic glass tools (that originated in eastern Oregon), or the jade adze (that came from near Prince George) that were both found at the Ye’yumnuts Ancestral Site in the Cowichan valley (Commemorating Ye’yumnuts).

It’s no secret that the L’kwungen and WSÁNEĆ both used fire to work with the ecosystems that sustained and sustain them (Turner 1999). If you’ve never wondered about the Garry Oak meadows that dot the parks and rare fields around what has become greater Victoria, these are the remains of a managed ecosystem that stretches over most of L’kwungen and WSÁNEĆ territories (and, by all reports, Cowichan and Sci’anew territories as well). It also explains why maintaining the remaining Garry Oak ecosystems is such a challenge for conservation groups like HAT, as early colonial governments outlawed the use of fire. The contemporary “fear” of fire management (or swidden agriculture) among settler populations is an outcome of those racially motivated laws (Turner 1999, especially page 189). From Meeacan (Beacon Hill Park) to “Uplands Park,” the camas fields stretched between villages, providing enough sustenance for many more people than actually lived here, leading to trade with other nations all around the Pacific Northwest.

Read more: Camas: The Roots of Life, Story, & Memory in the Land

HAT is launching its first ever artistic challenge!

This challenge is open to all and encourages you to show your artistic side by creating art inspired by wildflower drawing contributed by talented local artist and HAT's friend, Joanne Thomson (www.joannethomson.com).

You are welcome to simply colour the pages in your own style or just use it as inspiration to let your brain go wild!

ANY MEDIUM. ANY SIZE.

HAT hopes to spread the artistic messages of relaxation, engagement and appreciation of the natural world. The wildflower this week is Camas/ḰȽO,EL (Camassia), and it is just starting to bloom in parks all over the region.

Places to check out this beautiful flowers include Mt. Douglas/PKOLS, Mt. Tolmie, Beacon Hill Park and Uplands Park (just to name a few). Please go out and respectfully explore these areas, gain inspiration from these beautiful plants and of course adhere to social distancing guidelines.

We would love to see what you come up with! So check out the inspiration drawing in the file below, and if you would like to, please share your art with HAT and we will be sure to post your beautiful creations on our Social Media (@HabitatAcqTrust).

The act of freeing delicate mosses and wildflowers from beneath the overbearing invasive species that shade and crowd out all surrounding life, is a wonderful act of repentance for the harm that settlers and their relatives committed and continue to commit on this landscape. The impact of colonization on Vancouver Island is one that can be seen on the physical landscape around us. Invasive species create vast swaths of land where biodiversity is reduced to almost nothing. In late Janurary HAT hosted a memorial pull on Camas Hil for Moralea Milne, a butterfly specialist, restoration guru and an advocate for reconciliation and partnerships with indigenous communities during her career as councillor. The event was attended by a small group of volunteers who knew Moralea and a few HAT staff.

Join the HAT Team this Summer 2020

We expect to have one position available: Conservation Technician.

We're looking for a hard-working, enthusiastic person to support our programs in conservation. See details below and apply by Tuesday April 14th at 5:00pm

This position is contingent on federal funding from Canada Summer Jobs. Anticipated confirmation by early May 2020.

HAT is looking for a dynamic, self-motivated individual to assist our programs this summer.

I really appreciate HAT’s encouragement and support in developing the pollinator fedge here at Metchosin Farm. Seeds are the foundation of our food chain, and the 250+ seed crop varieties that we grow require a lot of pollination! We grow quite a few native plant species, and having our native pollinators is a wonderful way to support both of these. As a farmer I’m often running full-tilt trying to keep up with the weather, planting, administration and a myriad of tasks. Having Paige and Ronna from HAT helping to source and plant native species in the fedge made it possible to get more done there this year than I otherwise would have been able to. Thank you, HAT! 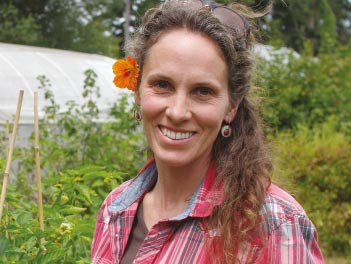 Check out HAT's brand new video about Hedgerows and how to plant your native plants!